Interest rates are rising, does that mean JPMorgan’s worth the chase to buy?


JPMorgan Chase & Co. (NYSE:JPM) has fallen nearly 30% over the past four months, dragged down by concerns about the economy and the ongoing conflict in Ukraine. As the stock hovers near an 18-month trading low, does one of the world’s most prominent financial institutions represent a buying opportunity, given that interest rates are set to continue higher?

Interest Rates, the Economy and JPMorgan

JPM was trading just below $170 a share in early January, only a little bit shy of its all-time record of $172.96. However, since that point, the stock has collapsed almost 30% as part of the general Wall Street washout that has been seen across the first five months of the trading year.

JPM was bolstered in 2021 by pandemic stimulus, which left consumers with a strong balance sheet, driving deposits and credit card purchases. However, since then, there have been signs of a pullback, as the economic situation has gotten murkier in recent months.

The company acknowledged this dynamic last month as it reported its latest earnings report. JPM added to credit reserves during Q1, citing higher downside risks. This included exposure to the volatile commodities markets and markdowns related to Russia.

Meanwhile, JPM, along with the rest of the financial sector, faces the complicated situation surrounding rising rates.

Typically, banking institutions’ profit margins expand as rates increase. Additionally, when rates rise, banks earn more money as they are able to take advantage of the spread between the interest banks pay to clients and the interest the institution can make by investing.

However, the Federal Reserve has launched an aggressive rate-hiking program to tamp down inflation. The speed of the increase has made many worry about the chances of a possible recession, which has put pressure on JPM and other banks. Many forecasters believe the Fed will raise rates another 250 basis points by year-end to combat inflation, muddying the picture of how JPM will fare in the immediate wake of further advances in interest rates.

Wall Street analysts have conflicting views about JPM’s near-term fortunes. Seeking Alpha has surveyed 26 analysts, with 13 analysts offering a Buy or Strong Buy rating. However, the other half of the analyst community shows more skepticism.

Eleven analysts label JPM as a Hold. At the same time, two list the stock as a Strong Sell, suggesting an undercurrent of bearishness.

Meanwhile, the average price target for JPM across 26 analysts sits at $154.19 a share, some 31% higher than its current value. Moreover, some predict that the stock could go as high as $200 a share, while others believe it can fall as low as $111.82 a share. 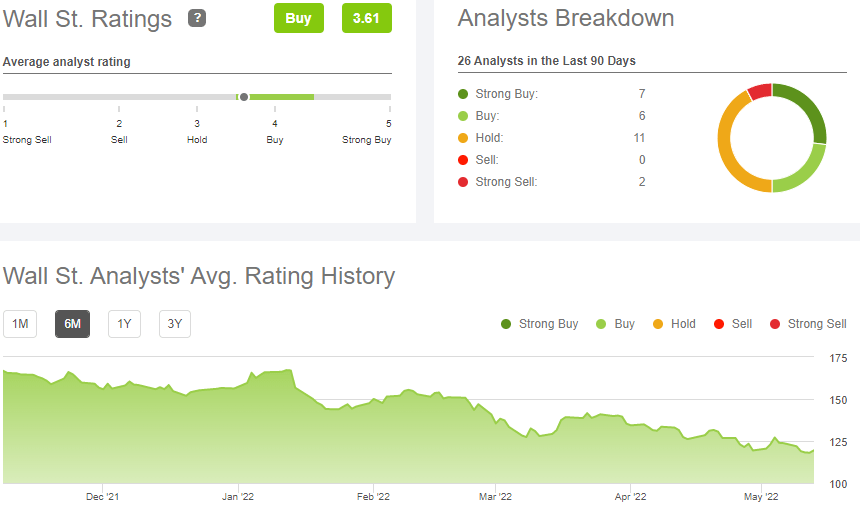 Quantitative ratings point to caution as well. Seeking Alpha’s Quant Ratings view the stock as a hold, amid worries about growth and momentum. The stock gets an A+ for profitability. However, it scores a D- for growth and a D for momentum. Valuation earns a grade of C.

For a bullish take on the stock, look to Librarian Capital, a Seeking Alpha contributor. They recently upgraded their rating on JPM to a Buy after shares fell 27% from their peak. The firm stated that “profits are normalizing after their COVID-year boost, but JPM businesses are otherwise stable.”

Meanwhile, fellow SA contributor The Value Pendulum believes that valuations and expenses will offer key signals as to whether JPM can return to $150.

Stablecoin supplies and cash reserves in question amid crypto exodus

How to Buy DeFi Pulse Index on CoinStats

Ether Capital Corporation Reports a Revenue of $1.2 Million in Q1 2022

How to Save Terra – Bitcoin Market Journal